Hi, today I’m going to be describing my best friend to you. 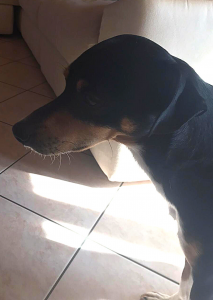 His name is Timo (Timothy) and he’s a half-breed dog, his pitch black fur is as soft as a pillow, his fur is full of different colors. Like a funny mixture of black, light brown and some white peppered on his muzzle. His tummy is white, pink and with some spots of darker brown.

He has brown eyes and cute, long black ears. There are also two things that are extra special about his appeareance; he’s a dog with eyebrows and they are light brown, which is a very cute contrast to his pitch black fur, and it makes them very noticeable.

He’s also a dog with socks, as my grandma always calls them. Timo’s black fur stops halway down his legs, and in its place you can see a light white fur. That’s what makes them look like socks.

He’s a super sweet dog, he always barks at cats because he thinks that makes him cool and because he hates them. But when he’s really face to face with one, he’s not so confident anymore.

He loves eating dog food and cheese, and he loves playing. He’s really shy with people that he doesn’t know and that’s why I call him an introvert dog.

Enjoy an edit I made for him a while ago!